On a trip to New Zealand, I was touring the wine country, and the tour guide pointed out the rose bushes planted at the ends of the rows of grape vines. My initial thought was, “What a lovely idea,” and I asked if they planted white roses for white wine grapes and red roses for red wine grapes. Our guide laughed and said, “Not exactly.” He then went on to explain that the reason for the roses was that if there was a problem with aphids, they would show up on the roses first, giving the farmer ample time to protect the grapes in the vineyard. 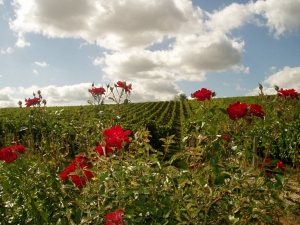 Immediately my mind went to all the women and girls I have worked with over the years — who struggled with eating difficulties. They were like the roses in the vineyards. Because they tended to be very emotionally sensitive and highly intuitive, problems in their families, communities, or in their culture, would register in their Being more readily and symptoms of distress would show up in them more quickly.

What if we were as clever as these farmers and recognized their eating/food/body image struggles were a tangible forewarning of a problem within our entire society, our entire culture? What if our media understood that the reason the bodies of models, celebrities, and movie stars have been getting thinner and thinner over the years is not an indication of changing beauty standards or the latest eye candy for the masses – but is, instead, an attempt to alert us to the danger of dieting mentality and emotional illiteracy that exists in our culture — and threatens us all?

And what if those who are struggling with eating and weight could see themselves as part of an entire culture that has been conditioned, even manipulated, to think of thin as good and fat as bad? Imagine if they could see themselves as sensitive beings who, at some very deep level are the heralds of a larger truth … that they are sounding an alarm that there is something really, really wrong … and that they broadcasting with their bodies the need to take action, now, before the problem becomes so widespread that it destroys us all.

The problem, as I see it, is we have become such a literalized, material culture, that we are loosing our ability to allow the non-visible qualities of our hearts and souls to grow and flourish. As we focus simply on the physical, concrete aspects of our existence (our bodies) and continue to narrow our definition of what they should look like, we fail to value the aspects of our Being that make us unique and special. We are encouraged to look, think, and feel like everyone else in order to “fit in.”

The “roses” I have had the pleasure of meeting and working with over the years have been some of the brightest, most creative, most talented people I have ever met. But they did not see themselves that way – at least not initially. They saw themselves as worthless, incompetent, unattractive, and weird. There was a common theme underlying their diverse struggles with eating and weight. It was a pervasive sense of not quite fitting in, of not seeing things they way others did, of being a “misfit.”

My job was not to help them fit in, but rather to help them find – and celebrate — the uniqueness of their Being so they could see how their sensitive nature was an important and valuable contribution to the world – not something to get rid of. Once they learned to embrace and give voice to their “Beingness” with words, their struggles with food, fat, and dieting became a distant memory.

Can you relate to this in any way? I am curious about your thoughts and would love it if you left a comment.